The Summer Film College is a bi-annual educational event that is as immersive as a film festival, but also presents film archival presentations and contains public screenings as part of the programming of Cinema Zuid. It is a platform that assembles the best of both Flemish cinephilia (Photogénie, Sabzian, RektoVerso, KASK Cinema) and academia (University Antwerp, St. Lucas Art School, University Ghent). The program of 2015 consisted of three strands: Burt Lancaster, Masterpiece in context and late Godard. The Royal Belgian Film Archive presented also their restoration of Pollyanna (Paul Powell, 1920).

To analyse acting is a challenge. It involves four layers: the personality in real life, the public role of the actor (persona or mask), the character in a narrative and the assessment of the performance. Tom Paulus and Anke Brouwers tackled the task of analysing the long career of actor Burt Lancaster in an exemplary fashion, delivering a well-researched and entertaining series of lectures. The cycle started with the prison film Brute Force (Jules Dassin 1947), Burt Lancaster is characterized as a strong rebel with weak spots. David Bordwell situated this film masterful in its contexts of the studio system of the forties, mentioning also many films that I put on my wish list, such as I Walk Alone (1948) and Kiss the Blood of My Hands (1948).

In Sorry Wrong Number (Anatole Litvak, 1948) Burt Lancaster shows his menacing side. Five years later, his projection of self-assurance is seen in optima forma in From Here to Eternity (Fred Zinneman 1953), a well-made drama, with a strong cast and a critical view on US-military. In the fifties and sixties Burt Lancaster functioned many times also as producer, for example in the case of the cynical Sweet Smell of Success (Alexander Mckendrick 1956). He acted in surprising weird movies like Elmer Gantry (Richard Brooks 1960) and The Swimmer (Frank Perry 1966). These films you have to see to believe it is possible to tell such confusing, twisted stories and troubled emotions of ambiguous characters. Seven Days in May (John Frankenheimer 1964) is in comparison a relatively straightforward political thriller, shown in amazing black & white Cinemascope. Burt Lancaster made in Hollywood a lot of comforting films, offering mainstream entertainment, acting as a pirate or cowboy.

In the last phase of his career Burt Lancaster became a distinguished star in European films, starting with Il Gattopardo (Visconti 1963). The screening of Local Hero (Bill Forsyth, 1983) in Antwerp gave reason to invite the director to be present and introduce also his later film Housekeeping (1987).

For the third time, the late-night screenings were built around an unannouncedmasterpiece, screened on the final night. An associative series of films led the participants to the mystery film, with each screening preceded by introductions filled with both hidden hints and further mystifications. The line up consisted this year of:

The masterpiece could naturally only be Vampyr (Carl Theodor Dreyer, 1932). A perfect choice!

As mentioned in 2013, ‘masterpiece in context” is an inspiring program concept because it allows you to screen very diverse films in a new and fresh combination. It also keeps the audience on their toes, challenging them to think about themes and techniques in new ways. What would be your choice of a masterpiece in context?

The cycle started with the screening of Une femme mariée (1964), followed by 8 films, ranging from Passion (1982) to Adieu au langage (2015). Six lectures offered us relevant context and reflection. David Bordwell took the lead with his lectures, titled “Godard, a Deformed Cinema: Shapes and Styles”, based upon three questions: What are his films doing with … film form and style; … the history of film as an art form; … the spectator? To answer these questions, an analysis is necessary, consisting of three steps: perception, comprehension (making sense, understanding) and appropriation. Bordwell concluded that the films of Godard are focused upon destroying our viewers’ engagement and recasting our viewing habits. Godard blocks understanding. You need to have specialized knowledge and taste refinement in order to enjoy these films, which are characterized by a combination of density and minimalism.

Positioning Godard is not easy. Some general notions: he is self-reflexive and takes a critical position towards contemporary visual culture. His films are fragmentary, multi-layered, using images and sound in an experimental way. The inconsistency of his films is intentional and is heightened through among others incoherent behaviour of the characters, unmotivated aggressive dialogues and abrupt scene changes. He is breaking or ignoring conventions of representation and storytelling.

My conclusion is: Godard is a rebel, sometimes with a cause, but often just with a personal fixation. For me, his films waver between fascinating and boring, between intriguing and boring. My first Godard film was Sauve qui peut (la vie), screened at the 10thInternational Film Festival Rotterdam 1981. This gave me immediately a splitting headache, so I missed the lecture Godard gave for a very selective audience. Michael Witt reconstructed this event:

Throughout the eighties I had the opportunity to see other new Godard films at the festival, such as Passion (1982), Prénom Carmen (1983) Je vous salue Marie (1985) and Détective (1985). At the same time, I also explored early Godard, for instance Vivre sa Vie (1963), advocated eloquently by professor Vandenbunder in his lessons at the Royal Belgian Film Archive. In the same period, a friend had bought a 16mm print of Le Petit Soldat (1963) and we watched it together at his kitchen table. It is a brave film: dealing with the atrocities of a hidden civil war in France, during the Algerian war. The French Nouvelle Vague was explored in the 1983-edition of the festival Cinemathema, on this occasion I could attend a screening of Pierrot le fou (1965), a poetic and fascinating film: absurdism is taken as counter strategy to the infiltration of contemporary popular visual culture in daily life. Another impressive film is Trois ou deux choses que je sais d’elle (1967), a lucid essay about daily life in suburbs and seeing the cosmos in a cup of coffee.

In 1995 Jean Luc Godard participated in the series Century of Cinema produced by the British Film Institute. The episode DEUX FOIS CINQUANTE ANS DE CINÉMA FRANÇAIS consists of a conversation with actor Michel Piccoli, the result is a fascinating morose monologue of a grumpy old man. Godard sees cinema as an intrinsic commercial affair that is bound to cease to exist. Michael Witt sketched the situation:

It was a privilege to have the opportunity of a festive book launch at the last Saturday afternoon of the Summer Film College. It is now official: Film Programming – Curating for Cinemas, Festivals, Archives is available, as part of the series Short Cuts of Wallflower Press (London), an imprint of Columbia University Press (New York).

This edition of the Summer Film College introduced a new set-up. Participants were now responsible to find their lunches and dinners on their own, and it was possible to follow the whole program or choose a limitation either to Burt Lancaster or Godard. This new set-up proofed to be a positive change, because it gave everybody more freedom. Happily enough every day coffee and tea kept streaming in generous amounts, as previously.

Summer Film College 2015 included also the presentation of the restored version of Polyanna. See the blogpost of Anke Brouwers at Photogenie.be: http://www.photogenie.be/photogenie_blog/blog/git-and-git-glad-restored-pollyanna-returns-big-screen 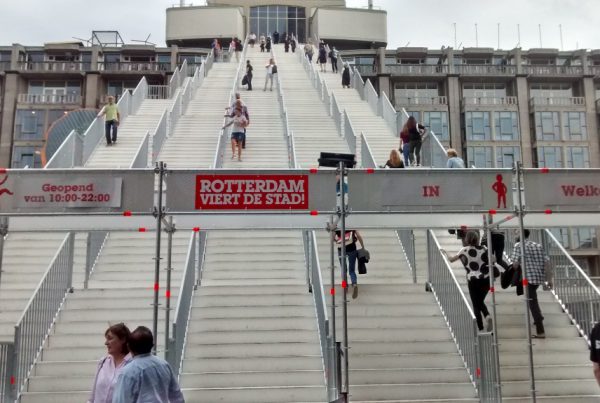